ONCE UPON A TIME: RARE19 LONDON 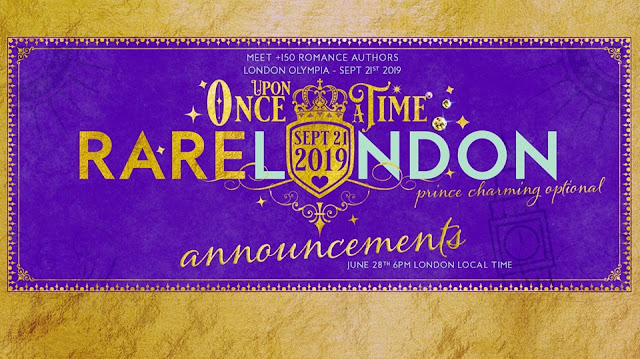 ONCE UPON A TIME: RARE19 LONDON

I wanted to go to an author signing for so long and now, it's finally happening. Not only that, but it's in one of my favorite cities in the world - London, get ready, here I come!

The closest I ever came to a signing is when Susan Elizabeth Phillips had a small signing in Croatia, but since it was a year when I had a Croatian version of SATs I missed it. There was just a short report on TV a couple of days later, and to say I was disappointed is an understatement. Susan is one of the first romance authors I ever read and I love her stories. So, I can't even begin to explain how excited I am to go to an actual signing.

I never thought much about signings because for years I simply loved to read books. What I didn't know what the whole word hiding behind those stories. And I'm not talking about a world hidden within the pages of the books. Authors are active on different social media where readers can go and connect to them. Facebook, Twitter, Instagram to just name a few. Each author has their own corner in the shape of their reader's group on Facebook, that to be honest, are my favorite.

So, when in early 2017 I started to be more active on social media aspect of reader's community I hear all about awesome signings, but of course, they're mostly in the USA. I mean, I get it. Most of the authors I read are from States, it's only natural that the biggest number of signings will be there too, but when you're from a small country in Middle/Eastern Europe traveling to the USA is just a big dream.

Then, I discovered RARE, and let me tell you I was so happy when I saw they're happening all around the world, including Europe. As a matter of fact, last two years they were in Europe exclusively. Paris, London, Rome... All the countries I could actually travel to for a faily resonable price. I wanted to go to RARE18 Rome so badly, but when I found out about it, the tickets were already sold out so I started to look at 2019. There are two RARE events in 2019: Paris in April and London in September and since we already established London is one of my favorite cities in the world... Yup, I'm going! I think on August 5th when the tickets are going on sale I'll be in front of my computer until I'm sure I have a ticket secured. lol

And the lineup? It's insaneee ... Just look at it!

(NOTE: author lineup is always subject to change since nobody can actually know what can happen in 16 months from announcement to the actual event)

I was squealing so hard as they were announcing it, totally distracted from everything else I was supposed to be doing, like you know that thing called editing? Yup, totally didn't do it that day, instead, I started to make lists. A lot of lists. Authors that I have read, authors that I haven't read but have been on my TBR so they're pushed forward so I can read at least a couple of books per author to prepare for RARE, books I have to get before the signing to have them with me etc. What can I say? I love to be organized, it helps me sort everything out and I'll need that for this event, otherwise, I'll end up bankrupt.

And I'm not even joking. I think as we speak I have a list of books to buy worth around 1000€ which is a no-no. And seriously, even if I did secure extra luggage for return, I couldn't possibly carry all these books with me so I'll have to decide on some priorities. I do, however, look forward to meeting and talking to all the authors, readers and bloggers. I can't wait to meet people who love the books as much as I do, make new friends, go sightseeing and partying in London. I still haven't decided how long I'll stay, probably 5-7 days, but I'll need to organize everything to a T so that I can squeeze all the thing I want to do and all the people I want to meet in this short amount of time.

I'm even thinking about asking my own readers who are either form UK or are coming to RARE if they'd like to meet for a coffee and chat. Nothing official, just simple meet and greet 'cause I love my kickass readers. So if you're reading this right now, and would like to do this make sure to let me know so we can organize something!

WHO AM I LOOKING FORWARD TO MEETING?

As you have seen already the list of authors that are attending the event is huge! There are more than 150 authors that are scheduled to come. Some I know from social media, I read some of them and heard of others although I didn't have a chance to read their books just yet. Here's where I'm standing right now:

THE AUTHOR I MOST FANGIRLED OVER GETTING A CHANCE TO MEET: Rebecca Yarros

There are many more amazing authors, but I think my list is challenging as it is. I'll see how it goes, but I hope to read 2-3 books per author before September 2019!


Here is how my "read before RARE19 London" looks like: https://www.goodreads.com/review/list/33682056-anna-doe?shelf=read-before-rare19-london

I checked my bookshelf and here's what I've got in paperback so far: 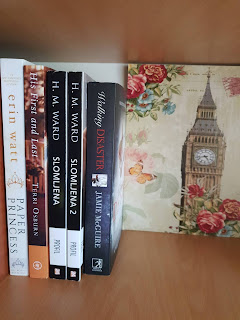 Through the next year, I plan to order a book or two per month from the authors I loved to bring with me to the signing. I think I'll start with Rebecca Yarros Full Measures and Cindi Madsen Lucky Number Seven and then we'll see what will come next! The list of authors that I love and are attending is long, but I'm sure I'll find some more along the way.

That's it for now! I hope you enjoyed this little-not-so-little post of mine. If you'd like to follow my self-made reading challenge make sure to follow me on Goodreads. And if you'd like to see more RARE related posts make sure to comment below and let me know! This next year in reading will be exciting and I can't wait for it.

prosinca 23, 2018
Lines Christmas Scene AMELIA Another knock rings on my bedroom door. “Coming!” I yell but don’t move an inch from my spot. “You said that the last three times your mom came and the last two I knocked. We’re going to be late, little one.” The way his voice deepens when he speaks my name makes to Goosebumps rise on my flesh. It’s low and intimate, and to be honest, cute. Who would have ever thought that Derek King–this big, badass hockey player–can be cute? We’ve been together for almost two months now, and I still can’t wrap my head around the fact that we’re together. Derek King is my boyfriend. Mine. I can see the blush rising on my cheeks in the reflection in the mirror. The reflection that brings me back to reality. Swallowing hard, the nervousness I was feeling returns back in full force. We’ve been together for two months, and now Derek asked me to meet his parents. Officially that is. I already met his dad on one of his hockey games, and he seemed nice
Objavi komentar
Pročitajte više