Through the eyes of a young woman: Hopelessness of the young generations 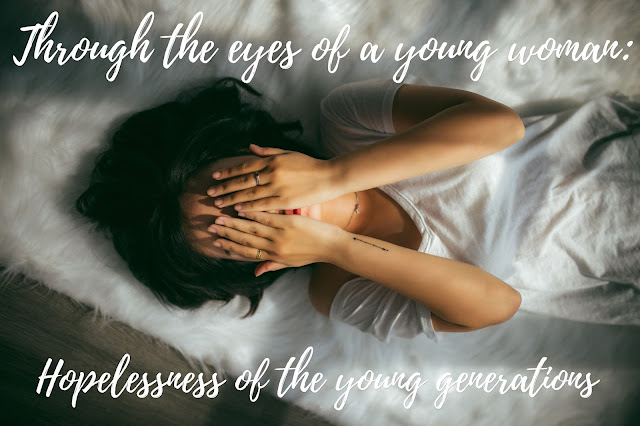 A while ago I saw this video on Facebook. You can find it if you click here. Basically, you get three boards with mixed letters. You write down the first word on each board you see and then you should get some answers hidden deep in your subconsciousness of who you are as a person.

The words I got are: humble, loving and hopeless.

The first word, in my case humble, is the word that describes me as a person. The second word, loving, is the way other people see me. And the third word, hopeless, is the way I feel about my future. 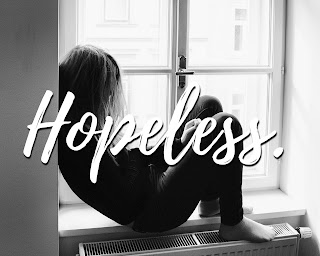 Now, you're probably wondering why I'm giving so much thought to some silly video posted on Facebook. I probably wouldn't, it's not in my nature to do so, but something about that words irks me. Becuase it's true.

I do feel hopeless.

I'm not sure if it's just me, a girl coming from a small country in Europe. Or maybe it's a problem of our generation in general. It could be a mid-twenties crisis, for all I know but the point is, I realized I do feel that way.

For a while, I pushed it back. When I finished college with Bachelor's degree in Spanish and Education I returned back home. A setback, but a necessary one. I got a student's job for the summer. It's not in the field I spent four years studying for, but it's a JOB. With so many people unemployed, you can't be picky about what you find. The company was happy with my work, so when my students right expired in the fall last year they hired me for a time with a possibility of extending my contract later on.

That was a year ago.

Now, in a few short weeks, I'll be twenty-four years old. 2-4. To some, it won't seem like a lot, but to me it is. What did I accomplish in those twenty-four years on this planet? I finished school, visited a country here and there. I learned languages and met people from other countries. I got my driving's license. I got my first adult job. I started working on accomplishing my dream.

Is it a lot or not good enough? Depends on who you ask, but to me, it feels like I could have done so much more.

My family?
They have expectations that can be summed up in two words: settle down. Do I need to say more?

My friend?
I love them, but we all have our lives now. And as hard as it's to admit it, we're growing up and moving on. We still talk occasionally, with some more than others, but our hopes and dreams for the future differ.

My job?
I don't necessarily hate it, but I don't want my future to be this way. My pay is not bad, but at the same time, it's not enough for me to think about moving away from my parent's house. It's not enough so I could consider traveling outside of Croatia a couple of times a year so I can see the world, something that I wanted for so long. It's not enough for a lot of things, a lot of dreams I've had for a while.

All that made me realize something ... I'm comfortable where I'm at the moment. But at the same time, it makes me wonder, is comfortable what I really want to be?

Do I really want to stay here and live just an ordinary, boring life? Do I really want to get up in the break of dawn five days a week, be stuck in the office only to get home and be stuck doing stuff around the house? Do I really want to be dependable on my parents, do what they ask me to in order to be the "perfect" daughter they want just so they don't nag me about living at home when they were the ones who wanted me to come in the first place? Do I want to put my needs and dreams second, so I can be what other people need me to be? Something unarchivable? Something perfect? Only no matter how hard you try, perfect doesn't exist and you just put yourself out for more disappointment.

Don't get me wrong. It isn't all bad in Croatia. Just as much and not everything is perfect in other countries. I'm not blind, and I consider myself a pretty realistic person, although at the same time I love to read and write books and live in the imaginary worlds.
My parents aren't bad people, but sometimes the things the community as such dictates are hard to avoid. Sometimes ... Sometimes it's hard to escape it all.

So, my answer is no.

I'm important too.
I deserve to live my life the way I want to live it without having to explain any of the WH-questions.
I deserve to meet, see and experience.
I, we, deserve a better, brighter future for ourselves and our families. 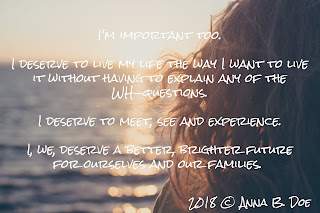 Three years ago, I made a decision. I took the summer off, packed my bags and went to Spain. It was the best decision of my life. Those few weeks that I spent there working have been the most exciting of my life.

Because when the plane starts to take off, the blood runs faster through my veins, my breathing slows down and my heart pumps faster in excitement. 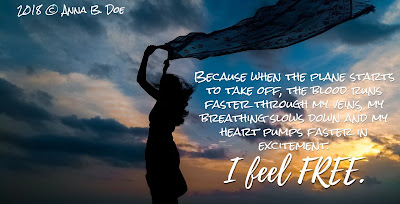 Just a young woman excited about her future. A possibility of something new, something undiscovered. A young woman with the hope that there is something better out there. Hope she'll reach it and shine brightly. Hope that her dream will come true.

Right now I'm facing a choice again. It could be the best thing that will ever happen to me, or it could be the worst decision ever. But the thing about choices? You never know how they'll really turn out until you make them.

Did I make the choice yet?

No, but I'm thinking about it. Because no matter how much I want to go and how many things push me in the direction of saying "yes", those same reasons are the ones holding me back.

Soon I'll have to decide. It won't be easy, but no decision worth taking is easy. And no matter what I decide, I know I'll live with it.

At the end of the day, you have to keep on moving forward.
Keep on breathing.
Keep on living. 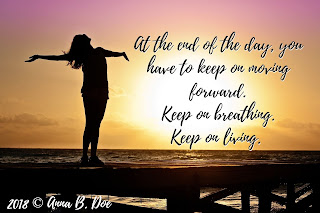 prosinca 23, 2018
Lines Christmas Scene AMELIA Another knock rings on my bedroom door. “Coming!” I yell but don’t move an inch from my spot. “You said that the last three times your mom came and the last two I knocked. We’re going to be late, little one.” The way his voice deepens when he speaks my name makes to Goosebumps rise on my flesh. It’s low and intimate, and to be honest, cute. Who would have ever thought that Derek King–this big, badass hockey player–can be cute? We’ve been together for almost two months now, and I still can’t wrap my head around the fact that we’re together. Derek King is my boyfriend. Mine. I can see the blush rising on my cheeks in the reflection in the mirror. The reflection that brings me back to reality. Swallowing hard, the nervousness I was feeling returns back in full force. We’ve been together for two months, and now Derek asked me to meet his parents. Officially that is. I already met his dad on one of his hockey games, and he seemed nice
Objavi komentar
Pročitajte više